An anonymous reader quotes CNBC: British Airways canceled all flights from London’s Heathrow and Gatwick airports on Saturday as a global IT failure upended the travel plans of tens of thousands of people on a busy U.K. holiday weekend. The airline said it was suffering a “major IT systems failure” around the world. Chief executive Alex Cruz said “we believe the root cause was a power-supply issue and we have no evidence of any cyberattack.” He said the crash had affected “all of our check-in and operational systems.” BA operates hundreds of flights from the two London airports on a typical day — and both are major hubs for worldwide travel. Several hours after problems began cropping up Saturday morning, BA suspended flights up to 6 p.m. because the two airports had become severely congested. The airline later scrapped flights from Heathrow and Gatwick for the rest of the day. Read more of this story at Slashdot. 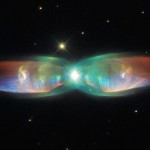 Start the week off with a beautiful new Hubble image of...