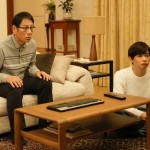 When you hear the term “live action Final Fantasy TV drama, ” you probably imagine something akin to Game of Thrones . But don’t get your hopes up too much. Final Fantasy XIV: Daddy of Light is actually an upcoming Japanese TV drama that centers on the relationship between a father and son playing the popular MMO, reports Kotaku . It’s based on a series of blog posts by a Japanese gamer who played FFXIV with his 60-year-old father, and it’s also apparently the first time Final Fantasy has inspired a live action show. The series will also incorporate in-game segments from the MMO when it launches in April, so fans will still be able to get their Chocobo fix. Via: Kotaku Source: Model Press