An anonymous reader points out this daunting construction plan in Japan. “Japanese authorities have unveiled plans to build a giant 250-mile long sea barrier to protect its coastline from devastating tsunamis. According to the proposals, the £4.6bn ($6.8bn) barrier would reach 12.5m high in some places – stretching taller than a four storey building. It would be made out of cement – and actually be composed of a chain of smaller sea walls to make construction easier. The plan comes four years after a huge tsunami ravaged Japan’s north-eastern coast.” Read more of this story at Slashdot. 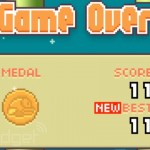 Flappy Bird no longer available from the App Store or Google...