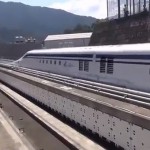 This maglev train’s length of development sure can’t a hold a candle to its speed — it took its creators almost six years to finally give it a test run. The five Lo Series cars zipped along the 26.6-mile track in nine minutes, hitting 311 mph within the first three miles. The reporters on board the futuristic vehicle couldn’t feel or hear any disturbance, except for the odd blown mind. Outside, however, watching members of the public felt a shockwave followed by a deafening roar as the duck-billed train zoomed past. Using results from this trial, the company will be assessing the platypus-like train’s potential environmental impact and looking for ways to reduce its maintenance costs in the future. You won’t be taking a ride on this levitating wonder during your next Japanese vacation, though — — CJCR’s got a few more tests to run before its 2027 launch date. Filed under: Misc Comments Source: The Asahi Shimbun (1) , (2)