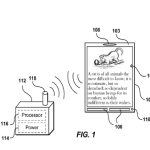 Bezos’ “remote display” patent envisions tablets and e-readers that are just screens—power and processing is provided wirelessly by a central system. US Patent & Trademark Office It seems like everyone is trying to jump on the cloud computing bandwagon, but Amazon Chairman and CEO Jeff Bezos wants to take it to a whole new level. GeekWire reports  that he and Gregory Hart have filed a patent for “remote displays” that would get data and power from a centrally located “primary station.” The tablets or e-readers would simply be screens, and the need for a large internal battery or significant local processing power would theoretically be obviated by the primary station. The patent sees processors and large internal batteries as the next major roadblocks in the pursuit of thinner and lighter devices. “The ability to continue to reduce the form factor of many of today’s devices is somewhat limited, however, as the devices typically include components such as processors and batteries that limit the minimum size and weight of the device. While the size of a battery is continuously getting smaller, the operational or functional time of these smaller batteries is often insufficient for many users.” The full patent is an interesting read, since it presents other potential use cases for these “remote displays” that wouldn’t necessarily need to wait on this theoretical fully wireless future-tablet to come to pass. For example: a camera or sensor could detect when a hand is passed over an e-reader display and respond by turning the page. A touch-sensitive casing could detect when a child is handling a display by measuring things like the length and width of their fingers and then disable purchasing of new content or the ability to access “inappropriate” content. Read 1 remaining paragraphs | Comments

Tesla To Voluntarily Recall Every Model S Because One Seat Belt...