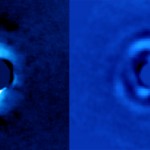 The W.M. Keck Observatory’s near infrared camera has a new instrument that gives it the power to capture images of Jupiter-sized exoplanets near their stars. That instrument is a vortex coronagraph , and it has recently taken its first two photos. One of them (top left) is a photo of the innermost of three dust discs surrounding a young star 380 light-years away. When the Jet Propulsion Laboratory team who published the study about the image combined the coronagraph’s data with Spitzer telescope’s and NASA’s WISE mission’s , they were able to conclude that the disc is made up of pebble-sized grains of olivine. That’s one of the most common silicates on Earth. The other (top right) is a brown dwarf — a celestial body bigger than the biggest gas giants but smaller than the smallest stars — that’s 23 times as far from its host star than the Earth is from the sun. Keck’s instrument was able to spot the brown dwarf despite its star’s brilliance, because coronagraphs are designed to filter out starlight. This particular one is special, though: it doesn’t block starlight with “masks” like other coronagraphs do. Instead, it redirects light by combining and cancelling out light waves. Now that JPL scientists have proven that the instrument works, they plan to continue using it to observe young stars that could have exoplanets in the future. Dmitri Mawet, the JPL scientist who led the study about the brown dwarf image, explains: “The vortex coronagraph allows us to peer into the regions around stars where giant planets like Jupiter and Saturn supposedly form. Before now, we were only able to image gas giants that are born much farther out. With the vortex, we will be able to see planets orbiting as close to their stars as Jupiter is to our sun, or about two to three times closer than what was possible before.” Source: NASA