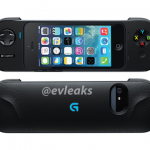 This Could Be the First Official iPhone Gaming Controller