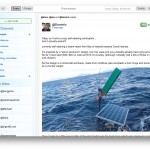 Scuttlebutt: an "off-grid" P2P social network that runs without servers and...