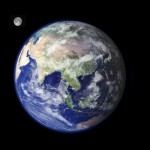 How the Circumference of Earth Was Accurately Estimated 2000 Years Ago