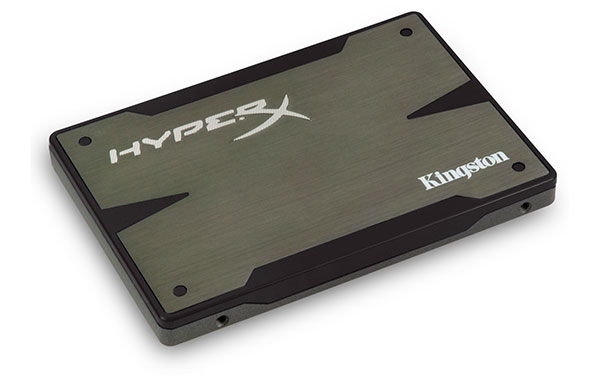 Kingston’s new HyperX 3K SSD has appeared, powered by a second-generation SandForce SF-2281 processor. Sizes ranging from 90GB to 480GB and are appropriately priced between $140 to $700 — depending on your storage tastes. With a SATA 6Gb/s interface wrapped in a black and aluminum casing, the HyperX 3K looks ready to spar with Intel’s similarly SandForce-powered SSDs. Kingston’s 2.5-inch drives have also finished the review party circuit, picking up some pretty positive responses. According to Anandtech‘s testing, the HyperX 3K performs almost as well as its 5K predecessor, landing just behind it for light workload tests (309.4 MB/s on average) and a heavy workload performance (225.8 MB/s) that netted it second place. Overall, they reckon the HyperX 3K is a “no-brainer,” offering great performance for less of those hard-earned dollars.

The relatively rugged design was the first thing that caught Storage Review’s eye, due to Kingston’s (presumably necessary) thermal armor. The site was suitably impressed by read rates, which were comparable to the original HyperX SSD. Write performance didn’t hold up quite as well during tests and due to the reduced quality of the NAND memory used, you will see a drop on total write cycles possible — something that mainstream users probably won’t lose much sleep over. Storage Review maintains that when it comes to both performance and pricing, Kingston’s latest “delivers on both fronts.” You can take a closer look at what both reviews have to say — and a whole load of tests — at the sources below.

Kingston HyperX 3K SSD review round-up: Cheaper than its predecessor and almost as good originally appeared on Engadget on Tue, 10 Apr 2012 10:53:00 EDT. Please see our terms for use of feeds.