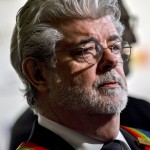 Unbeknownst to some, Los Angeles and San Francisco had been clashing for months on yet another front: Which would win the right to build an elaborate, expansive museum housing film ephemera and personal art collected by George Lucas. As is only proper for the nexus of cinema, Hollywood won the fight. Yes, the upcoming museum will feature choice souvenirs from the Star Wars franchise, but it aims to be a serious institution with the money to back it up. Lucas will allegedly front $1 billion himself in construction costs and art as well as the creation of a $400 million endowment fund. The 275, 000 sq ft building will sit in Exposition Park south of downtown, joining the California Science Center, Natural History Museum and California African American Museum. It will house over 10, 000 paintings and illustrations including works by Rockwell, N.C. Wyeth and R. Crumb, according to The Los Angeles Times . Canny fans will note that the future site of the George Lucas Museum of Narrative Art is blocks away from the University of Southern California campus, where he studied as a young filmmaker. It’ll also be an hour-drive away from another sizable monument to his legacy when Disneyland’s upcoming Star Wars Land eventually opens. Source: The Los Angeles Times