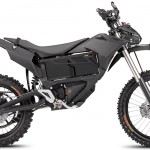 If we were ever asked to ride an electric motorcycle, our first instinct would be to make NYEEEEAWWWW noises to compensate for the vehicle’s silent engine . That’s precisely why we’re not employed by the Los Angeles police department , which has just bought an electric motorcycle for stealth operations. The department has only ordered one of the vehicles so far, purely as a test of its potential, but given that it produces no emissions and can be charged for less than a dollar, shouldn’t displease the force’s bean-counters. Of course, the lack of a tailpipe also makes this ideal for activity within buildings, so expect police chases in the near future to be a lot more exciting than the average freeway dash. Unfortunately for everyone else, the Zero MMX in question isn’t available on general sale, since it’s tailored for special forces units and police departments. That’s just as well, since it’s capable of fording rivers of depths up to three feet, goes from 0-to-60 in under five seconds and has a top speed of 88 miles per hour. In fact, this electric superbike only has one real flaw: it’ll only run for two hours before you need to plug it in again. Perhaps, if you’re planning to do a crime in Los Angeles, you should be to go get a full tank of gas before you begin. Filed under: Transportation Comments Via: Wired Source: PRNewsWire

Lost Languages Discovered in One of the World’s Oldest Continuously Run...