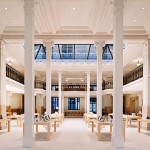 If you think you’re having a rough morning after your New Year’s festivities, an Apple Store in Paris’ opera district is still trying to determine just how much hardware was stolen after four or five armed thieves robbed the store three hours after it had closed. More »

Read the article:
Last Night Armed Robbers Stole Over $1 Million Worth Of Gear From a Paris Apple Store

Every Year of Smoking Causes About 150 New DNA Mutations That...

Holy Cow: Video of Rival Contractors Battling Each Other With Heavy...