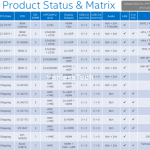 According to the slides, there will be three new NUC boards spread across give different boxes, all launching in the first half of 2015. FanlessTech We’re generally fans of Intel’s NUC (“Next Unit of Computing”) mini-PCs, which use Ultrabook parts to create reasonably capable desktop PCs that can fit just about anywhere. When last we heard about new Broadwell-based versions of the boxes, they were due to launch in late 2014, but delays of higher-performance Broadwell parts  has apparently pushed them back. New Intel slides from FanlessTech now show seven new NUC boxes launching in the first half of 2015. The slides also tell us what kind of boxes we can expect, though there are no big surprises here; the Broadwell NUC lineup is broadly similar to that of Haswell. There appear to be three boards: one high-end Core i5 model, one middle-end Core i3 model, and one Core i5 model with Intel’s vPro technology integrated to make it more appealing to enterprises. All appear to come in two types of enclosures, one with extra room for a 2.5-inch SATA III hard drive and one without. This makes for a total of six Broadwell NUC boxes. The revised NUC roadmap. FanlessTech All six boxes will share most of the same ports and features: two display outputs, Ethernet, four USB 3.0 ports, NFC, M.2 slots for SSDs, support for up to 16GB of RAM, and changeable lids (these may just be for customization purposes, though past rumors have suggested that some could be used as wireless charging pads). The vPro models will use two mini DisplayPorts while the standard i5 and i3 boxes will use one mini DisplayPort and one micro HDMI port, and all models appear to come with Intel’s 7265 802.11ac and Bluetooth 4.0 adapter soldered on—with current models, you must supply your own mini-PCI Express Wi-Fi card. Read 6 remaining paragraphs | Comments