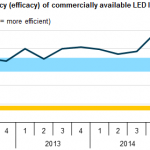 US EIA A few years back, when I got my first LED-based lightbulb, it seemed natural to stick it into a wattmeter to get a sense of its efficiency. At under 15 Watts of power drawn, it clearly beat any incandescent bulbs I’d ever put into the same lamp. But I was disappointed to find that it wasn’t any better than a compact fluorescent bulb. Based on the graph shown above, my experience was hardly unique; in fact, it was decidedly average. Although the technology behind LEDs had the potential to be far more efficient than any other lighting source, the complete LED bulb package wasn’t doing that much better at the time than the far more mature fluorescent bulbs, which output roughly 60 lumens for every Watt put in. After some small boosts in 2013, however, a new generation of more efficient LEDs hit the market this year, raising the typical efficiency to nearly 100 lumens per Watt. The increased efficiency is coming at a time when prices for the bulbs continue to drop; given their expected lifetimes, they’re now far and away the most economical choice for most uses. Read 1 remaining paragraphs | Comments

Whatsapp now has 500 million active users to offer its new...