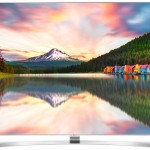 Forget all the hype about 4K at CES last year — this year’s trend is 8K . LG has revealed some of the first details about its 2016 TV lineup, and the highlight is its first production-grade 8K model, the UH9800. The Korean tech giant isn’t saying much about what this 98-inch monster will offer or when it ships, but it’s safe to say that this won’t be an impulse purchase when Sharp’s 8K screen costs about $130, 000. Don’t worry if you’re unwilling to take out a mortgage just to upgrade, as there are plenty of upgraded 4K TVs in the mix. The UH8500 (55 to 75 inches) and UH9500 (55 to 86 inches) series both tout Color Prime Plus, which mixes both filters and LCD phosphors to reach about 90 percent of the Digital Cinema Initiative’s expanded color range. Both these and the lower-end UH7700 (49 to 65 inches) also tout a “True Black” panel that cuts glare and improves contrast, along with a Contrast Maximizer option that… well, does what it says. The UH9500 is your pick if you’re design-conscious, since it has an extremely slim (0.22-inch) body that manages to cram in a relatively powerful Harman/Kardon audio system. All of LG’s newer sets should pack the easier-to-use webOS 3.0 for their interface. It’s not yet known how much you’ll pay for the 4K models, but it won’t be surprising if there’s at least one within your budget given rapidly falling prices. The real question is what Samsung, Sony and others have to offer. LG gets points for announcing early, but you may well see strong alternatives (even among 8K sets) before long. Source: LG Newsroom 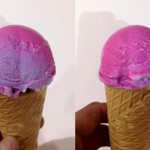 Physicist concocts ice cream that changes color when you lick it