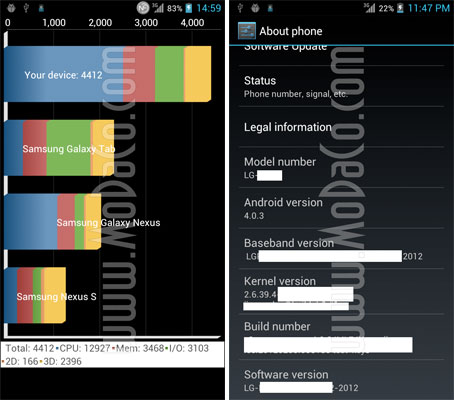 LG’s got a leak and it’s revealing some intriguing details on another flagship smartphone — even backing them up with some screenshots. According to MoDaCo‘s mole, it will brandish a 4.7 inch (720 x 1280) display, powered by LG’s first Tegra 3 quad-core setup. Processor speeds for the LG X3 are pegged at around 1.5GHz on a single core, dropping to 1.4GHz during multi-core use. Hopefully, the 2,000mAh battery will withstand all that thinking power, while Ice Cream Sandwich should help push those multitasking chops to its limit. Camera-wise, you can expect an increasingly standard eight-megapixel sensor, with a 1.3-megapixel camera on the front. There also appears to be some NFC hardware inside, identified by that circular logo at the top of these tantalizing screengrabs — something we saw on LG’s Prada phone 3.0. We’re hoping to get a full explanation (and a look at some hardware) at Mobile World Congress. There’s just a few weeks to go.