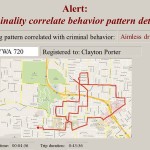 In Meet Jack. Or, What The Government Could Do With All That Location Data , the ACLU’s Jay Stanley presents a slide deck from the near future in which a government intelligence service presents a glowing account of how it convicted “Jack R Benjamin” of DUI pre-crime, by watching all the places he went, all the people he interacted with, and using an algorithm to predict that he would commit a DUI, and, on that basis, to peer into every corner of his personal life. The use of the slide deck is inspired here, echoing as it does the Snowden leaks (Snowden had been tasked with consolidating training documents from across the NSA, which is why he had access to such a wide variety of documents, and why they’re all in powerpoint form). And the kind of data-mining here is not only plausible, it’s likely — it’s hard to imagine cops not availing themselves of this capability. Just out of curiosity, who else has been visiting Mary Smith’s house? Looks like Mary has a few close friends. Wonder if Mr. Benjamin is aware of this Bill Montgomery character who spent a few nights with her? Going back to the main screen, looks like Mr. Benjamin is quite a union activist. Perhaps we should notify George over at BigCorp (he serves at the Fusion Center with us). Just in case our man has been involved in the trouble they’ve been having over there. Meet Jack. Or, What The Government Could Do With All That Location Data [Jay Stanley/ACLU] ( via MeFi )

Follow this link:
Life from the near future of location surveillance