As amazing as Half-Life 2 was when it was first released in 2004, time has not been kind to the original release’s graphics, which can look a bit flat and dated compared to modern PC games. Enter Romanian modder Filip Victor , who’s ready to release the final version of a massive, Source engine-powered graphical update for the game on Steam for free tomorrow. As shown in a slick comparison trailer  and detailed in a PDF brochure , Half-Life 2: Update offers graphical improvements like high dynamic range lighting, improved fog and particle effects, world reflections, more detailed water rendering, improved background models, and other effects that just weren’t feasible back in 2004. The update also fixes a number of animation and cut-scene-activation bugs that have persisted in the original release and adds optional fan commentary from a number of high-profile YouTube personalities. Despite all the graphical changes, the update leaves the original gameplay, level design, character models, textures, and animations intact. “The goal of Half-Life 2: Update is to fix up, polish, and visually enhance Half-Life 2 , without ever changing the 2004 original’s core gameplay, or time-tested style,” Victor wrote in the update’s brochure. “I wanted to ensure that the update was something that would be enduring, and worth the time it takes to play it. I hope that both newcomers and veterans of the Half-Life series will enjoy seeing the work that went into its creation.” Read 2 remaining paragraphs | Comments 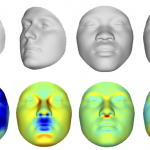 Now Police Can Reconstruct Your Face From DNA Evidence