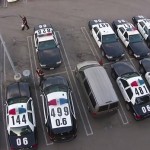 The cops may be eager to experiment with drones for tracking bombs and (possibly) suspects, but they’re apparently not that keen on people turning the tables. The LAPD claims that activist Daniel Saulmon was trespassing when he flew a machine over a Hollywood police station’s parking lot. He was spying on “private property, ” Lieutenant Michael Ling claims. As you might imagine, Saulmon (who has a history of recording officers on the ground) disagrees. He didn’t step inside, after all, and he contends that law enforcement doesn’t have the same privacy rights as individuals. Saulmon wasn’t busted for his drone flight, and it’s not clear that the LAPD can do much at this stage. It’s a public institution, and the Hollywood location has a see-through fence — it’s not as if the police were guarding a secret operation. He wasn’t interfering with their activities, either. There’s a chance that California and other states will draft rules limiting what both civilians and cops can do with unmanned craft, but it looks like these confrontations between cops and accountability advocates could continue so long as a gray area exists. Filed under: Robots Comments Via: Ars Technica Source: LA Times , Tom Zebra (YouTube)

Borked Belkin routers leave many unable to get online