Venus May Have Been Habitable, Says NASA 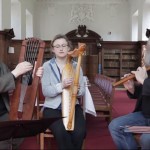 Medieval music recreated and performed for the first time in 1000...