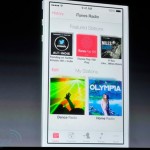 iTunes Radio launches September 18th alongside the release of iOS 7