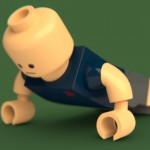 Lifetime Ladder is a Free, No-Equipment Fitness Plan Anyone Can Start