There’s Millions of Dollars Worth of Gold and Silver in Sewage... 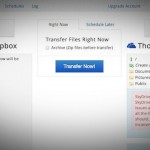 Mover.io Transfers Your Files from One Cloud Service to Another