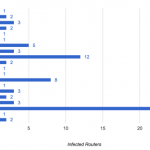 ZMap.io The highly clandestine attacks hitting Cisco Systems routers are much more active than previously reported. Infections have hit at least 79 devices in 19 countries, including an ISP in the US that’s hosting 25 boxes running the malicious backdoor. That discovery comes from a team of computer scientists who probed the entire IPv4 address space for infected devices. As Ars reported Tuesday, the so-called SYNful Knock router implant is activated after receiving an unusual series of non-compliant network packets followed by a hardcoded password. By sending only the out-of-sequence TCP packets but not the password to every Internet address and then monitoring the response, the researchers were able to detect which ones were infected by the backdoor. Security firm FireEye surprised the security world on Tuesday when it first reported the active outbreak of SYNful Knock. The implant is precisely the same size as the legitimate Cisco router image, and it’s loaded each time the router is restarted. It supports up to 100 modules that attackers can tailor to the specific target. FireEye found it on 14 servers in India, Mexico, the Philippines, and Ukraine. The finding was significant, because it showed an attack that had long been theorized was in fact being actively used. The new research shows it’s being used much more widely, and it’s been found in countries including the US, Canada, the UK, Germany, and China. The researchers wrote: Read 5 remaining paragraphs | Comments

More:
Malicious Cisco router backdoor found on 79 more devices, 25 in the US

iPhone 6s Rumor Roundup: Everything We Think We Know