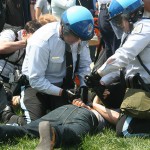 Elvert Barnes/Flickr Maryland’s Prince George’s Police Department (PGPD), which covers part of the Washington, DC metropolitan area, announced on various social media platforms that it will be live-tweeting a prostitution sting operation “sometime next week.” What could possibly go wrong? Despite a headline that reads as if it were written by The Onion —or perhaps its latest viral media parody spinoff Clickhole —the PGPD explains that its decision to employ this “unprecedented social media tactic” stems from the desire to shame prostitutes and others involved in “the oldest profession” and to let them know that “this type of criminal behavior is not welcome in Prince George’s County.” According to information provided on their Blogger, Twitter, and Facebook accounts, the PGPD will be documenting the planned takedown with frequent updates during the arrests, tweeting photos and arrestee information. The planned takedown in Maryland will target johns, not prostitutes themselves, and will be set up using online ads, according to the department. The PGPD elaborated: Read 4 remaining paragraphs | Comments