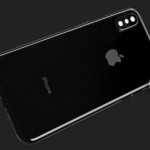 The iPhone 8 reportedly swaps the home button for gesture controls