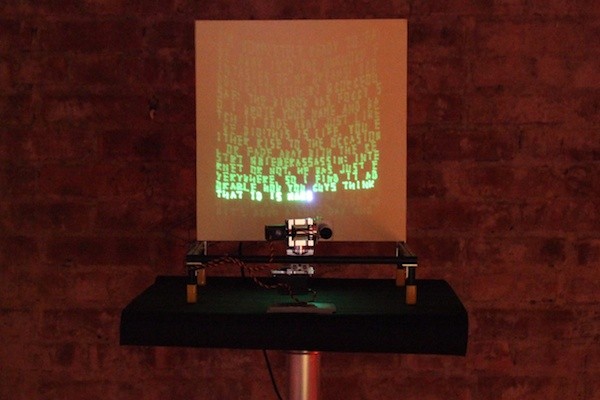 Matt Richardson’s genius has never really been in question. The Make Live host and compulsive hacker has built an impressive library of creations, ranging from a Google Reader pedal to an email-triggered Christmas tree. The man’s works are definitely art, in their own way, but his new project, Fade Away 1, is the first that we could easily see taking up residence in a SoHo gallery. At the heart of the installation is an Arduino (of course) that pulls in posts from Twitter with the phrase “fade away” in them. The same AVR chip then “prints” those tweets on phosphorescent paper with a UV laser mounted on a servo — as the energy dissipates, the messages slowly disappear. And, if you’re wondering what the “1” at the end of the title means, Richardson plans to continuously improve the project. For some more details about the next iteration and to see the current one in action, check out the videos after the break.

Matt Richardson turns Arduino, Twitter and lasers into art (video) originally appeared on Engadget on Mon, 26 Dec 2011 11:18:00 EDT. Please see our terms for use of feeds.