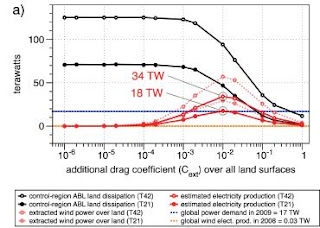 The availability of wind power for renewable energy extraction is ultimately limited by how much kinetic energy is generated by natural processes within the Earth system and by fundamental limits of how much of the wind power can be extracted. Here we use these considerations to provide a maximum estimate of wind power availability over land. We use several different methods. First, we outline the processes associated with wind power generation and extraction with a simple power transfer hierarchy based on the assumption that available wind power will not geographically vary with increased extraction for an estimate of 68 TW. Second, we set up a simple momentum balance model to estimate maximum extractability which we then apply to reanalysis climate data, yielding an estimate of 21 TW. Third, we perform general circulation model simulations in which we extract different amounts of momentum from the atmospheric boundary layer to obtain a maximum estimate of how much power can be extracted, yielding 18–34 TW. These three methods consistently yield maximum estimates in the range of 18–68 TW and are notably less than recent estimates that claim abundant wind power availability. Furthermore, we show with the general circulation model simulations that some climatic effects at maximum wind power extraction are similar in magnitude to those associated with a doubling of atmospheric CO2. We conclude that in order to understand fundamental limits to renewable energy resources, as well as the impacts of their utilization, it is imperative to use a “top-down” thermodynamic Earth system perspective, rather than the more common “bottom-up” engineering approach. 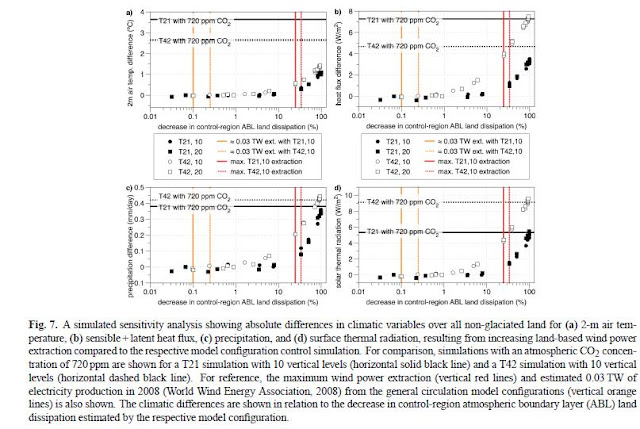 17 Terawatts of electrical wind power would be 50-95% of the maximum land based wind possible with significant climate effects. There would be temperature and rain differences.

Of the 47 TW of energy that we use, about 17 TW comes from burning fossil fuels. So to replace this, we would need to build enough sustainable energy installations to generate at least 17 TW. And because no technology can ever be perfectly efficient, some of the free energy harnessed by wind and wave generators will be lost as heat. So by setting up wind and wave farms, we convert part of the sun’s useful energy into unusable heat.

“Large-scale exploitation of wind energy will inevitably leave an imprint in the atmosphere,” says Kleidon. “Because we use so much free energy, and more every year, we’ll deplete the reservoir of energy.” He says this would probably show up first in wind farms themselves, where the gains expected from massive facilities just won’t pan out as the energy of the Earth system is depleted.

Using a model of global circulation, Kleidon found that the amount of energy which we can expect to harness from the wind is reduced by a factor of 100 if you take into account the depletion of free energy by wind farms. It remains theoretically possible to extract up to 70 TW globally, but doing so would have serious consequences.

Photosynthesis also generates free energy, but without producing waste heat. Increasing the fraction of the Earth covered by light-harvesting vegetation – for example, through projects aimed at “greening the deserts” – would mean more free energy would get stored. Photovoltaic solar cells can also increase the amount of free energy gathered from incoming radiation, though there are still major obstacles to doing this sustainably

If you liked this article, please give it a quick review on ycombinator or StumbleUpon. Thanks

Taken from:
Maximum wind and wave power limited by free kinetic energy and maximum wind power extraction would be as bad as doubling atmospheric CO2