cartechboy writes: “One of the arguments for electric cars is that we are reducing greenhouse gases and emitting less CO2 than vehicles with an internal combustion engine. But Mazda says its next-generation SkyActiv engines will be so efficient, they’ll emit less CO2 than an electric car. In fact, the automaker goes so far as to say these new engines will be cleaner to run than electric cars. Is it possible? Yes, but it’s all about the details. It’ll depend on the test cycles for each region. Vehicles are tested differently in Europe than in the U.S., and that variation could make all the difference when it comes to these types of claims. At the end of the day whether future Mazdas with gasoline-powered engines are cleaner than electric cars or not, every little bit in the effort to reduce our carbon emissions per mile is a step in the right direction, right?” Read more of this story at Slashdot. 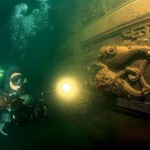 Your Next Scuba Destination Is An Entire Drowned City in China