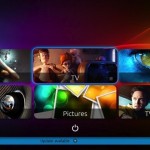 Home theater PC owners only just recovering from their turkey or tofu comas will have some updating to do — MediaPortal has been busy. The experimenters among us will most likely want to jump straight into the promised MediaPortal 2.0 Alpha Autumn , which carries new visual layouts and video backgrounds, a news plug-in and a party-friendly music player. New versions of remote tools like aMPdroid, MPExtended, WebMediaPortal and WifiRemote bring their own slew of upgrades, such as HTTP Live Streaming in MPExtended or a “what’s new” interface in aMPdroid. We’ll readily admit that our eye is most drawn to the yet-to-be-launched MediaPortal 1.3 beta’s addition of the Titan skin you see up above: going beyond what we saw in October, the extra-polished look goes a long way towards accommodating newcomers and the style-conscious. We’re still waiting on publicly accessible 1.3 beta code, but everything else is waiting for open-source media hubs at the included links. Filed under: Cellphones , Home Entertainment , Software , HD Comments Via: Missing Remote Source: MediaPortal (1) , (2) , (3)