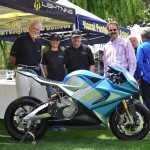 The Lightning LS-218 boasts a model number that actually means something. Back in 2012, a prototype of the electric bike clocked in a wholly unnecessary (yet much appreciated) 218mph, helping it to win at Pikes Peak and setting it up to become the world’s fastest production motorcycle. The finished version is now ready to make good on that promise, having just been revealed at the Quail Motorsport Gathering in California, prior to a scheduled launch in the summer — at which point it’ll likely cost upwards of $38, 000. The bike has a much sharper look now, but the key specs are just the same, including a liquid-cooled 200-horsepower motor and a max range of 180 miles, depending on which battery option you choose. The weight of the battery causes it to be a heavy ride (225kg / 495 pounds) compared to some gas-powered superbikes out there, but what makes the Lightning stand out is the incredible torque (168 ft-lb) delivered by its gearless, direct drive internals. If you want to get a taste of what that feels like while blowing past someone on the highway, check out the video below at 3:10 — you’ll see a white sedan disappear into the background so quickly that you can barely identify the make. Filed under: Transportation Comments Via: Gizmag Source: Lightning Motorcycles