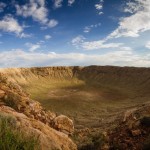 Sites like this can be searched for glass beads that reveal the past. rickmach Meteorite impacts can be very destructive. A meteorite that fell in Mexico around 66 million years ago created a 180 km crater and caused the extinction of non-avian dinosaurs while spewing debris and molten rock into the air. Now, in what is a fascinating tale of serendipity, researchers have found that these events don’t entirely destroy all traces of life at the site of impact. Molten rocks can capture and preserve organic matter as they cool down to form glass beads. When a meteor enters Earth’s atmosphere, the friction causes it to heat up, scorching everything in its path. Most of the time that’s where the story ends, as the meteor burns up in the sky as a “shooting star.” But sometimes it’s big enough to reach all the way to the surface and transfer its remaining energy to the ground. This energy is dissipated as mild earthquakes and sound shockwaves—but mostly as heat. The heat energy can be so great that it melts rocks on the surface and hurls them up in the atmosphere. Anything that comes in contact with this molten rock would presumably get burnt, leaving nothing but rocky material that cools down in the atmosphere, forming glass beads and tektites (gravel-sized natural glass). This is what City University of New York researcher Kieren Howard assumed, but he was able to show that his assumptions were wrong. Read 12 remaining paragraphs | Comments

Download Your Tax Return Transcripts Straight from the IRS