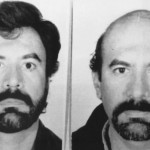 Francisco Rafael Arellano Felix , the eldest of seven brothers of the Tijuana cartel. Francisco Rafael Arellano Felix, aka “El Pelón” (the baldie), eldest brother in Mexico’s once-dominant Tijuana drug cartel, was shot to death by gunmen disguised as clowns at a children’s party on Friday. Arrellano Felix, 63, was assassinated by the clowns during the family event in an upscale tourist residence in Cabo San Lucas, a popular tourist destination on the Baja California peninsula, state special investigations prosecutor Isai Arias told Associated Press on Saturday : An official of the Baja California Sur state prosecutor’s office told the AP that the costumes included a wig and a round red nose. Reuters reports that there was one gunman, with two male accomplices. El Universal de Mexico has a backgrounder on the crime family. They were the most brutal, most bloody, for decades. A portion of the Arrellano Felix crime family, in an undated photograph from the 1980s. Via El Universal.

The TSA Is So Bad That Delta Has Had to Install...