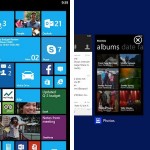 It’s autumn, which means it’s time for Microsoft to come out with its latest and greatest update for Windows Phone. This year, however, the company isn’t pushing anything as drastic or significant as WP8 , and it even shows in the name of the refresh itself: GDR3. (GDR stands for General Distribution Release.) The update, which will begin rolling out in the coming weeks and “will continue over several months, ” doesn’t feature any improvements to the notification experience, but it delivers on a few important enhancements that are sorely needed — especially when it comes to hardware support. First, GDR3 will now offer Start screen support for screens between 5 and 7 inches, with resolution support now set at a maximum of 1080p (both of which lend credence to the leaks we’ve seen of the Lumia 1520 , Nokia’s upcoming 6-inch device). As an aside, we’ve confirmed with a Microsoft rep that this update won’t be adding support for full-on tablets, though we can’t rule out that possibility in a future refresh. Future Windows Phones can become much more powerful as well, now that the update adds support for Qualcomm’s Snapdragon 800 quad-core SoC. On the software side, Microsoft is throwing in Driving Mode, which limits notifications on the lock screen and can be set to trigger whenever you connect a Bluetooth device. You can also close individual apps in the multitasking menu, lock your screen orientation and assign custom ringtones for text messages. Also, remember that annoyingly vague “other” category in the storage settings? GDR3 now breaks it down into more specific categories and lets you manage each one (excepting the system storage). Aside from these enhancements, Microsoft claims “hundreds” of other tweaks and fixes, many of which are under the hood. For a few more details, head below the break to look at the official blog post in its entirety. Filed under: Cellphones , Wireless , Mobile Comments