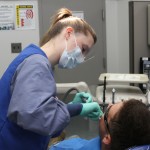 Regenerative tooth fillings could put an end to root canals