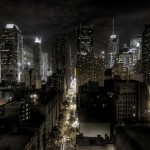 NYC Is Replacing Its 250,000 Street Lights with LEDs