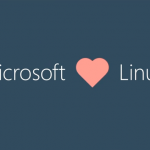 Wait, what happened at this thing?!? Microsoft In San Francisco today, Microsoft CEO Satya Nadella said something that was more than a little surprising: Microsoft loves Linux. The operating system once described as a “cancer” by Nadella’s predecessor, Steve Ballmer, is now being embraced (if not extended) with open arms, at least when it comes to Redmond’s Azure cloud platform. Nadella told us that some 20 percent of VMs on Azure use the open source operating system. The San Francisco event served dual purpose. First, it was an opportunity for Microsoft to tell the world just how much Azure had grown—Microsoft may not have been first to the cloud computing scene, but a ton of investment and development means that the company is now credible, and, if Gartner’s magic quadrants are to be believed, world-leading. Second, the event served to introduce new features and partnerships. Microsoft’s major sales pitch for Azure is essentially a three-pronged argument that Microsoft is the only company that can really do cloud right. Read 10 remaining paragraphs | Comments