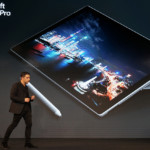 Microsoft has mostly left the Surface Pro line untouched since late 2015, but the company is finally giving it a long overdue refresh today. Announced at an event in Shanghai earlier, the new machine — now simply dubbed Surface Pro — packs Intel’s 7th-gen Core processors ( Kaby Lake ; m3, i5 and i7 flavors), an enhanced PixelSense display, optional LTE Advanced radio and a battery life of up to 13.5 hours for video playback, which is a notable jump from the old nine hours. Oh, and there’s no longer a fan for the m3 and i5 models. Simply put, Microsoft calls this “the lightest, the best sounding, the fastest and the quietest Surface Pro ever, ” and the company was keen to claim that its own machine is 1.7 times faster than the iPad Pro . While the machine itself looks pretty much the same as before from afar, up close you’ll notice the slightly rounded edges. What’s also not immediately noticeable is the new hinge design: you can now push it all the way down to 165 degrees — or “Studio Mode, ” as Microsoft would like to call it. Even the Surface Pen has been given a spec bump: the old 1, 024-level pressure sensitivity is now at 4, 096 levels, and it comes with tilt sensitivity along with a speedy 21ms latency. Much like the recently announced Surface Laptop line, the new Surface Pro comes with an Alcantara keyboard in three colors: platinum, cobalt blue and burgundy. Pre-order starts today at $799 and up, with specs starting from 128GB SSD plus 4GB RAM all the way up to 1TB SSD plus 16GB RAM, and it’s shipping in mid-June. This mid-cycle update was expected after Surface chief Panos Panay said that a Surface Pro 5 wouldn’t appear until there’s “an experiential change that makes a huge difference in product line.” Even then, this new Surface Pro does manage to pack a few surprises, so it should keep us entertained for the time being. And if that doesn’t scratch the itch, you could just buy one of the many alternatives from other hardware makers. Jon Fingas contributed to this post. Source: Microsoft

More:
Microsoft made the Surface Pro both lighter and quieter

Astonishing Behind-the-Scenes Video Shows How The Jungle Book Was Filmed in...