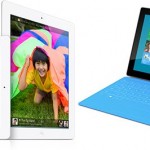 Microsoft’s new recycle-for-reward initiative doesn’t target one of its own devices — instead, it focuses on another company’s popular gadget: Apple’s iPad . The trade-in program offers at least $200 in exchange for a “gently used” iPad 2, 3 or 4 . You can probably get more than $200 in other places, especially for the newer slates, and you can even get cash instead of the Microsoft Store gift cards Redmond’s giving out. However, outgoing CEO Ballmer and Co. are hoping you’ll find the project helpful if you’ve been wanting to buy their products anyway — particularly the Surface tablets, as evidenced by their prominent placement on the program’s page. Before you surrender old iPads to give Surface a chance, know that the trade-in scheme will run until October 27th, which gives you time to see Microsoft’s next attempt . Filed under: Tablets , Microsoft Comments Via: ZDNet Source: Microsoft

How to Grow Objects With Mushroom Mycelium