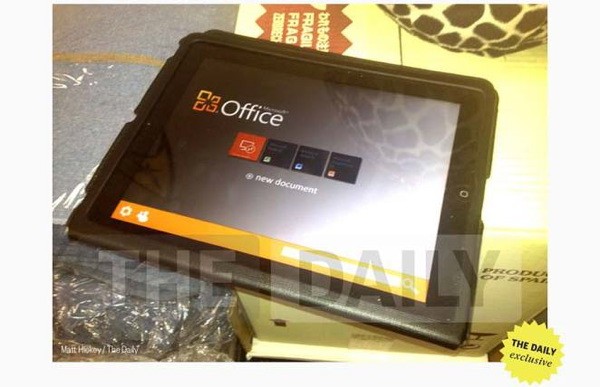 What you see before you is a single image purporting to be Microsoft’s new Office app for iOS. We can certainly believe such an app exists, and according to The Daily, the UI is similar to OneNote with an added dash of Metro. You’ll be able to produce and edit Word, Excel and PowerPoint files locally and online, but the app is still to run the Cupertino’s approval gauntlet. The report also claims an Android version is isn’t in the works and but that a Metro-styled refresh of OneNote is due in “the coming weeks.” That said, we’re not sure what sort of place doesn’t take the plastic off its carpets, leaves big “product of Spain” crates lying around with leopard-print plushies and USS Enterprise logos hanging on the wall — but perhaps we’ve underestimated Redmond’s capacity for a good party.

Update: We incorrectly reported that an Android version was forthcoming, we’ve edited to correct our mistake — please accept our sincere apologies.

Microsoft Office for iOS gets blurrycam treatment in weird party-room originally appeared on Engadget on Tue, 21 Feb 2012 11:51:00 EDT. Please see our terms for use of feeds.

The Daily | Email this | Comments