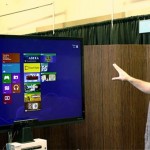 Shortly after the Kinect SDK first launched , it spawned a number of inspired efforts from researchers to make it do more than just track your body. Microsoft Research finally seems to be catching up to its own tech, as it just flaunted a recent project that allows fine-tuned gesture control, thanks to a newly developed talent for the motion sensing device to read whether your hand is open or closed. That let the team simulate multitouch-like capability on a PC as they air-painted basic images and manipulated Bing maps by varying their hand states. The hardware used doesn’t appear to be stock, so whether such new capability entails a rumored new version of the Kinect that may or may not appear on a (rumored) future Xbox , we’ll leave for you to decide. Filed under: Peripherals , Microsoft Comments Via: NeoWin Source: Microsoft Research