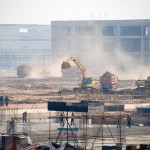 Foxconn Zhengzhou facility, under construction in February 2012. Bert van Dijk / flickr One company—Taiwan’s Foxconn—makes a staggering 40 percent of the world’s consumer electronic devices. Starting now, Microsoft will be getting paid a toll on a large number of those devices. The company’s long patent-licensing campaign has landed its biggest client yet in licensing Foxconn, formally named Hon Hai Precision Industry Co. Foxconn has agreed to take a license for any product it produces that runs Google’s Android or Chrome operating systems. The Redmond software giant has insisted for years now that any company making Android phones needs to license its patents. That campaign has generally been successful; so successful , in fact, that by 2011 Microsoft was making more money from patent licensing than from its own mobile phone system. Read 9 remaining paragraphs | Comments

This Woman Secretly Dubbed American Movies During the Cold War