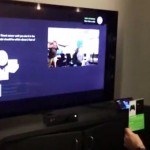 How quickly can you redeem an Xbox One download code ? Quickly enough to fit the experience into a six-second Vine video , apparently. Microsoft’s Major Nelson has just posted one of the looping clips (after the break) to prove that you can scan codes with the console’s Kinect sensor in mere moments. It’s doubtful that anyone will need to grab content quite that quickly, but the demo is a friendly reminder of the time we’ll save by ditching old-fashioned keyboard input after November 22nd . Filed under: Gaming , Home Entertainment , HD , Microsoft Comments Source: Major Nelson

More:
Microsoft shows how to redeem an Xbox One download code in six seconds (video)