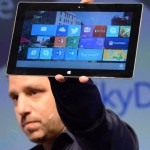 It’s not the first time we’ve heard that Surface tablets would be coming in multiple sizes, but Microsoft’s Panos Panay offered the clearest indication yet that the line could soon be expanding at a Microsoft Store event in Seattle last night. As GeekWire reports , while Panay didn’t get too specific, he did say that Microsoft has “a lot of great things that we are thinking about and working on, and there are multiple aspect ratios and sizes and awesome things to come from Surface.” He further went on to confirm that an LTE version of the Surface 2 (but not the Surface Pro 2 ) would be heading to AT&T in the US and Vodafone in Europe early next year — something he first mentioned on Reddit last week — although he again held back on any more specific launch details. Filed under: Tablets , Microsoft Comments Via: The Verge Source: GeekWire

These 10,000-Year-Old Instruments Are Playing Their First Modern Gig