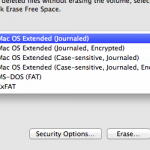 It’s only been about seven months since Apple  released OS X 10.9,  the latest and greatest version of its Mac operating system. But the yearly upgrade cycle means that unless something unexpected happens, Apple will tell us about OS X 10.10 at the traditional keynote next month on the first morning of its Worldwide Developers Conference (WWDC). The operating system is over 13 years old and it’s come a long way since those first versions , but it’s still not perfect. What areas do we think Apple should focus on in 10.10? Think of the SSDs Isn’t it time our modern hard drives got a modern filesystem? The latest Macs may have solid state drives that can read and write over 700 megabytes per second over a direct PCI Express connection, but all that data is still organized by a file system from the previous millennium: HFS+. There’s something to be said for using stable, battle-hardened code for the file system, which is probably the most critical part of the operating system. Unfortunately, Apple’s current HFS+ implementation isn’t as stable as it should be, much to the chagrin of Ars’ OS X reviewer extraordinaire John Siracusa. With the introduction of a logical volume manager—Core Storage—it looks like Apple has found a way to innovate in the area of storage without having to replace HFS+. One of the big missing features in HFS+ is snapshots . Time Machine, for example, works per-file. Changing a few bytes in the middle of a large file means that the entire file is copied during the next backup. With snapshots, that’s not necessary: multiple snapshots share the unmodified disk blocks. As such, snapshots could be implemented in Core Storage rather than in the file system. This would allow Time Machine backups to be much faster and more efficient. Read 18 remaining paragraphs | Comments

Continued here:
Missing features we’d like to see in the next version of OS X