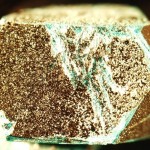 It’s not often that researchers can verify a discovery that could change how we approach basic principles of technology, not just build on what we know. Nonetheless, MIT might have accomplished just such a feat in demonstrating a new state of magnetism . They’ve shown that a synthetically grown sample of herbertsmithite crystal (what you see above) behaves as a quantum spin liquid: a material where fractional quantum states produce a liquid-like flux in magnetic orientations, even if the material is solid. The behavior could let communications and storage take advantage of quantum entanglement , where particles can affect each other despite relatively long distances. MIT warns us that there’s a wide gap between showing quantum spin liquids in action and developing a complete theory that makes them useful; we’re not about to see Mass Effect ‘s quantum entanglement communicator, if it’s even possible. To us, realizing that there may be a wholly untapped resource is enough reward for now. Filed under: Science , Alt Comments Source: MIT

Teens get banned from an app after vicious attacks and threats