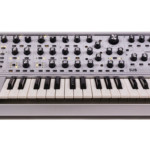 Last year at Moogfest , the namesake synth maker set up a temporary instrument factory to crank our its Model D reissue . For the 2017 installment of the analog soiree, Moog is building another synthesizer on-site in Durham, North Carolina, but this time it’s a retooled version of the more compact Sub 37 . Officially dubbed the Subsequent 37 CV, this new model carries a similar overall construction as its predecessor. However, the front panel is now silver and the side panels are solid aluminum with inset North American hardwood. I won’t be shy about it: This thing is a beaut. “We were inspired to create the Subsequent 37 CV by, or due to, all the feedback we received from players who were in love with the deep modulation capabilities of the sub 37 and wanted to bring that expressivity out to the other gear in their studio, ” explains Moog engineer Amos Gaynes. The “CV” in the model name refers to the four assignable control voltage outputs on the side that sit next to two assignable gate outputs. Those connections allow you to connect the Subsequent 37 CV to much more robust modular systems. Moog also revamped the keybed for increased playability and upgraded headphone amp for live monitoring with high-quality sound. The company also modified the analog signal path on this new piece of gear. “[Control Voltage] allows you to take an changing [electrical] signal from one place to and use it to control the properties of a different sound-making circuit, ” Gaines notes. “It’s important because it allows you to interconnect one thing and another. It allows you to freely connect sources of expression with the musical properties of your studio equipment.” He also explains a key advantage to analog: its responsiveness.”One really good thing about control voltage is that it’s direct and immediate, ” he says. “It’s much higher resolution than digital equivalents. It’s alive–it’s infinitely responsive.” In terms of changes to the sound profile, Moog retuned the Multidrive circuit for even more growl and a grittier sound than the original Sub 37. There’s also now more headroom in the mixer which improves the sound in Duo mode. In fact, Moog says there’s twice as much headroom on the Subsequent 37 CV than the Sub 37 Tribute Edition. And yes, that classic Mood Ladder Filter is still part of the tool box as are some familiar controls from that previous model — like 256 presets and 16 banks of 16 patches. “We took the opportunity when redesigning the instrument not only to add expressive CV output control, but to realize some of our long-held ambitions for the sound engine, ” Gaines says. The first 125 synthesizers will be built at Moogfest and feature presets from artists like 808 State. Those units will be sold exclusively through Guitar Center at the event between May 18-21. Moogfest in Durham. If you can’t make the trip on short notice to take in the event in person, Moog plans to sell 2, 000 of the instruments total, so you’ll have a shot at nabbing one after this weekend. If you’re able to find one, you’ll need to hand over $1, 799 in order to take it home.

Follow this link:
Moog’s latest Sub 37 synth has even more grit than the original