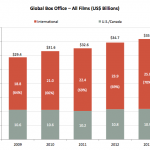 Once again, the “piracy-stricken” motion picture association has had a banner year , with box office revenue breaking all records (as they’ve done in most recent years). The biggest gains this year come from China — a market condemned by the studios as a hive of piracy. Some of the best news in the report is that American movies are seeing success in China, which has become the first international market to reach more than $3 billion in movie sales. The Chinese enthusiasm for US-produced movies comes despite the fact that China continues to  restrict  the number of foreign-made films that can be released in theaters to 34 imports a year. But the country at the top of the MPAA’s sales charts is also at the top of its piracy target list. Last year, the MPAA placed China on the list of the “most notorious” markets for distributing pirated movies and TV shows. As reported by the  LA Times ,  MPAA spokesperson Michael O’Leary has explained: The criminals who profit from the most notorious markets through the world threaten the very heart of our industry and in doing so threaten the livelihoods of the people who give it life. These markets are an immediate threat to legitimate commerce, impairing legitimate markets’ viability and curbing US competitiveness. Despite prolific piracy, China’s increase in sales has been positively “meteoric,” MPAA chief Chris Dodd said at a press conference yesterday , noting a 27 percent increase. Piracy notwithstanding, MPAA enjoys a “very strong year”—again [Joe Silver/Ars Technica]