Visit site:
Mozilla and Thunderbird are continuing together, with conditions

We’re One Step Closer to Being Able to Regrow a Lost... 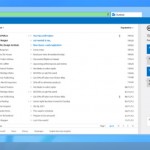